X-ray (radiography) of the temporomandibular joint 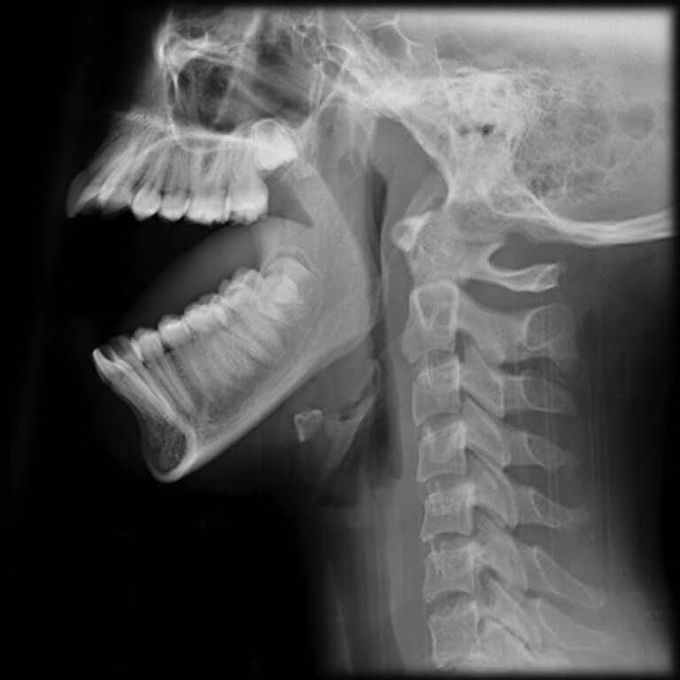 X-ray of the temporomandibular joint (TMJ) belongs to the category of diagnostics, which has been used for a long time. She managed to prove herself exclusively on the positive side, as she provides a detailed diagnostic picture.

The technique has been successfully used for more than a dozen years, becoming the key to a speedy recovery of patients with deviations in the area of ​​​​the bones of the lower jaw and the joint located there.

The main advantage of diagnostics is the ability to transmit a clear image of the state of solid structures in a given area. The principle of operation of the device is based on fixing the degree of attenuation of radioactive rays that pass through the structures of the body. The resulting result is transformed into a kind of photo.

The essence of radiography of the temporomandibular zone

If earlier patients received black-and-white pictures in their hands, which they had to walk around the hospital for fear of inadvertently crumpling, today progress has stepped far forward. Now the received visual information is sent to the computer memory of the new generation X-ray machine. From there it can be written to any digital media.

Often, diseases of this zone are based on pathologies of the articular disc, or destabilization of the intraarticular ligament.

No less often, the primary source of all problems is the inability to perform their functional duties as a capsule. Even arthritis does not bypass this joint.

Although radiography is not always able to provide a 100% clear image of the area under study, it is the most popular way to find the root cause of the disease.

A clear list of symptoms when you should sound the alarm does not exist due to the individual characteristics of the human body. But, if problems begin with the limitation of the functional mobility of the lower jaw and the connecting joint, then this is a reason to seek help.

You also need to pay attention to:

If you find at least one of the above symptoms along with joint pain, you should immediately contact a traumatologist or maxillofacial surgeon for advice.

An x-ray is also taken to determine the degree of damage to functional deviations that are caused by:

When a patient is going to have surgery, even if it is an ordinary plastic surgery, you still cannot do without a picture. More serious reasons for contacting the X-ray room may be the following diseases at different stages of development:

Moreover, the sooner the victim turns to the attending physician, the more effective the subsequent treatment will be, based on the detailed information received.

Separately, situations are considered when the doctor has every reason to assume deforming arthrosis of the joint for a long time. Such a serious pathology is a consequence of the dystrophic process in the joint. And, if initially it was customary to believe that inflammation is the impetus for triggering the lesion of the mandibular joint, today the range of causes has expanded. Hormonal disorders, physical injuries and changes in the tone of the masticatory muscles for any reason, up to genetic diseases - all this contributes to the destructive process in arthrosis.

A black and white image of the bony structure will provide visualization of the joint space. If even a slight narrowing is visualized, then this will be the beginning of a painstakingly built rehabilitation therapy. Also indicate a possible deviation will be seals of the articular tubercle. Occasionally, even exophytic formations are fixed in patients, which are characterized by growth inside the joint, aggravating the condition.

Another common ailment that affects both young and elderly patients is arthritis of the temporomandibular part. The underlying causes for the development of a serious illness can be:

The course of the disease takes less than a month to trigger the destructive mechanisms inside the joint. Already in the third week of a neglected disease, the picture will demonstrate the narrowing of the joint space. Since this visualization point is also characteristic of arthrosis, doctors will definitely consider additional parameters to establish an accurate diagnosis.

We are talking about the clarity of the end plates and marginal usurative changes. If the former have become less expressive in the image, and erosion is visible on the bone elements, then effective treatment is indispensable.

Periodically, X-rays are prescribed for those victims who have become victims of fractures and dislocations, but are already on the mend. Regular monitoring is necessary in order to adjust the previously established course of treatment, taking into account intermediate performance indicators. Monitoring the condition will allow you to track how quickly and correctly the bones grow together.

Usually, arthrologists are sent for analysis, but since far from all state medical institutions have such a professional in the state, appointments are mostly given out:

For almost all types of confirmation of the diagnosis, even old devices that give out the results of the examination on film are suitable. But occasionally, doctors insist that the patient do a study on a digital device. It is believed that it is able to provide clearer pictures.

Despite the ubiquitous use of x-ray equipment, everyone knows that its exposure negatively affects overall well-being. This is especially true for people from specific risk groups, as well as those who managed to get exposed to radiation several times in a row in a short period of time.

For adults, the dose of radioactive exposure used is considered within the normal range, but only on the condition that in the next few months he will bypass the office of such diagnostics. But on babies, the same dose of rays acts more pronouncedly. Hence the desire of doctors to protect babies by sending them from x-rays to computed tomography, where radiation exposure is much less.

In addition to babies, pregnant women at any time were at risk. Some women in an interesting position naively believe that when examining the jaw, the radiation will not reach the abdomen, but this is an erroneous opinion. Even with the slightest fluctuations in the radiation background, the development of the fetus according to the normal scenario may be in jeopardy. We are talking about increased risks of mental and physical retardation of the unborn child. To reduce the chances of a negative scenario, it is better to turn to ultrasound as a more benign alternative.

But even the issuance of a referral to an adult should be carried out under the strict supervision of the attending physician. The increased vigilance is explained by the fact that the ionizing effect negatively affects the state of the salivary glands located nearby.

Despite a number of specific contraindications, the technique does not require significant preparatory measures. Usually, adults are prescribed a survey version of the study, even if the dental structure of the lower jaw and joint is to be examined.

But for a child, doctors are limited to close-up contact shooting, if the functional features of the innovative version of the X-ray machine allow. Then even a dental examination can be carried out without a tube for the formation of radiation, which will not frighten the youngest patients of the dental clinic.

To get a reliable picture, the laboratory assistant may ask the patient to fix the oral cavity in turn in two positions:

If serious complications or rare pathologies are suspected, the doctor may suggest additional administration of a contrast agent that increases the information content by increasing the clarity of visualization of the lesion.

But here it is worth showing double vigilance, since at the stage of contrasting there is a possibility of an allergic reaction. To avoid anaphylactic shock, you need to ask in advance for an allergic test, and only then go for diagnostics.

Dentistry is considered a separate category for the use of temporomandibular type images. Moreover, a dentist visitor will be sent to take a picture several times with a sustained period of time to prevent excessive exposure.

At the initial examination, the doctor will refer you for an examination if you suspect a problem. The analysis will help with the change of milk teeth to molars, various tooth lesions, injuries, discrepancies in the number of teeth to the norm.

Sometimes an unsuspecting patient who comes in for a routine consultation will also be sent to the X-ray room, as the expert will reveal suspicious symptoms in him. They do not always have a pronounced color, worsening the level of quality of life. So, with periodic toothaches, a person is unlikely to go to a dental clinic.

Usually, they seek help already when they have endured to the last, as evidenced by bleeding gums, swelling of the cheeks, an unhealthy color of tooth enamel, and even problems with speech due to severe pain.

To avoid such serious complications, it is better to seek help at the initial stage of destabilization of the function of the lower jaw and joint.

What type of X ray is used for TMJ?

A panoramic radiograph is considered a “screening” projection and is often used in combination with other hard tissue imaging techniques to image the TMJs. 4 (Fig 1a). It gives an overview of the jaws and teeth, allowing evaluation of mandibular symmetry, the maxillary sinuses and the dentition. 1 June 2005

Can TMJ be seen on an X ray?

How is the temporomandibular joint function examined?

The joint is auscultated during mandibular motion. The normal joint functions relatively quietly. Listen for crepitus or grinding and clicking or popping sounds. The degree of mandibular opening is measured using the distance between the incisal edges of upper and lower anterior teeth .