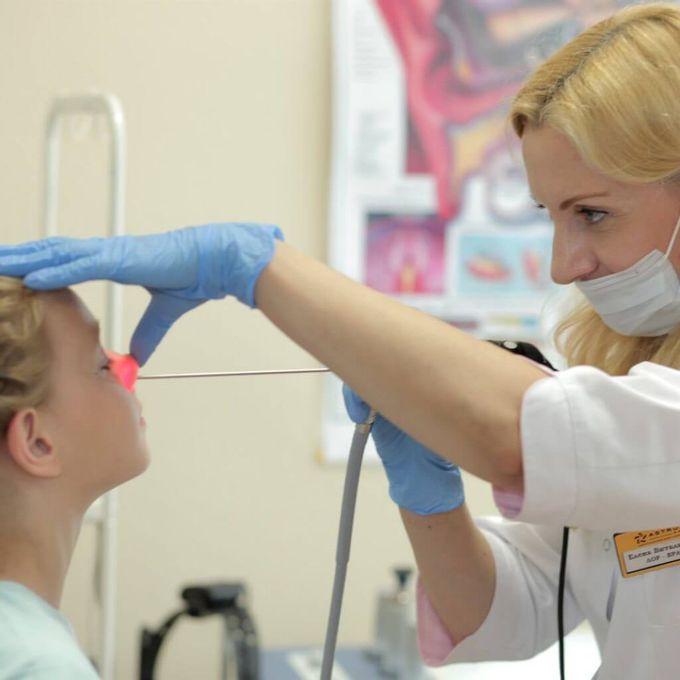 Rhinoscopy is an instrumental examination of the nasal cavity in otorhinolaryngology. The term is of Latin origin: "rhino" - "nose" and "scopia" - "to look." The diagnostic study has several options, each of which involves the use of various auxiliary tools - a nasal dilator, a nasopharyngeal mirror, a rhinoscope.

Rhinoscopy as a research method is widely used in ENT practice and is carried out for every patient who has applied for an appointment with an otorhinolaryngologist with breathing problems and pathologies of the upper respiratory tract and paranasal sinuses.

There are several types of rhinoscopy: anterior (direct, external), middle and posterior (indirect, retrograde, mirror). Different types of rhinoscopy are performed using different instruments and in different positions. With the help of anterior rhinoscopy, the floor of the nasal cavity, two thirds of the nasal septum and the anterior halves of the middle and inferior turbinates are examined. The middle rhinoscopy allows you to examine the middle nasal concha and the middle nasal passage with the olfactory fissure. Posterior rhinoscopy shows the posterior parts of the three nasal passages, the nasal septum, and the nasopharynx.

There are two more options for examining the nose - endoscopic (rhinoendoscopy) and surgical rhinoscopy, which have special indications for their implementation.

Anterior rhinoscopy is also called direct or external. This examination involves the use of a nasal dilator for examination. The patient sits opposite the doctor, who fixes the patient's head with his right hand, and with his left inserts a closed nasal dilator into the nostril. At the same time, the depth of insertion of the viewing dilator depends on the examined area of ​​the mucosa and the age of the patient. In young children, an ear funnel may be used instead. After insertion, the dilator is carefully opened.

For direct rhinoscopy, the patient's head must be in one of two positions. The first option is to examine the nasal cavity with the head upright. In this position, the lower part of the nasal cavity, the lower nasal passage and the lower third of the septum are accessible for examination. The second option involves tilting the patient's head back. In this position, the middle nasal passage and the anterior cells of the ethmoid labyrinth are accessible for inspection.

The middle nasal passage is examined most carefully, since the natural openings of the nose (maxillary, frontal) open into it.

During rhinoscopy, the condition of the mucosa is assessed (wet, dry, atrophic, edematous, pale, hyperemic, cyanotic, with spots, hemorrhages), the size of the turbinates, septum, properties and amount of discharge are characterized.

In some cases, with direct rhinoscopy, it is possible to examine the posterior wall of the nasopharynx and the lymphoid tissue on it, adenoiditis can be diagnosed. In some cases, the patient during the examination is asked to pronounce some sounds (words) or tilt the head to the right or left, thereby improving the visual examination.

Normally, direct rhinoscopy should not cause pain. If the patient is in pain, for example, after a nose injury, the mucosa is irrigated with a local anesthetic before the examination.

In addition to examining the nasal cavity with a bellied probe, the mucosa is felt and its density, elasticity, as well as the shape, consistency, localization, and mobility of pathological formations are assessed. In this way, foreign bodies can be detected and, in most cases, removed.

Anemization contributes to the improvement of the examination of the nasal passages and the differential diagnosis of hypertrophic and other forms of rhinitis. Anemization is the treatment of the nasal mucosa for several minutes with strong vasoconstrictors (ephedrine with adrenaline). After vasoconstriction, much more surface of the mucous membrane and structures of the nose is available for inspection. In hypertrophic rhinitis, after anemization, the expansion of the nasal passages does not occur due to the pathologically thickened mucosa, which distinguishes it from other forms of rhinitis.

In many cases, anterior rhinoscopy can be performed without additional nasal dilators. For inspection, it is enough to lift the tip of the nose and illuminate the nasal cavity with a reflector or other light source.

After the introduction of a nasal dilator with closed branches, they are carefully opened. On examination, the following is assessed:

Since the procedure is unpleasant and can cause pain, the nasal mucosa is pre-treated with local anesthetics, and with severe swelling of the mucosa, with vasoconstrictors.

This procedure is carried out using a nasopharyngeal speculum, which is inserted deep into the oropharynx, behind the uvula. At the same time, the tongue is pressed down with a spatula so that it does not interfere with the inspection. The patient, if possible, should breathe through the nose.

The light from the reflector is directed to the mirror and the formations in the nasopharynx are examined. To prevent the patient from having a gag reflex, the doctor must be careful during the examination and avoid touching the root of the tongue and the back of the pharynx with a spatula or mirror. With a pronounced gag reflex, the patient should treat the posterior pharyngeal wall with a local anesthetic spray before the procedure.

Posterior (retrograde, indirect) rhinoscopy allows you to examine the choanae, pharyngeal openings of the auditory tubes, the back of the three nasal conchas, nasal passages, the vomer (the back of the nasal septum), the posterior wall of the nasopharynx and the soft palate.

Indications for carrying out

Knowing and considering what cavities and structures of the nose and nasopharynx rhinoscopy allows to explore, the indications for its implementation are:

Rhinoscopic examination is carried out for diagnosis, dynamic monitoring of the effectiveness of the treatment, before surgical interventions on the ENT organs.

Anterior rhinoscopy has no contraindications. The middle and posterior rhinoscopy examination is not carried out for newborns, children under one year old and children of younger preschool age. In case of severe pain in older children and adults, anesthesia is performed before the procedure or it is replaced by endoscopic examination or other diagnostic methods.

Rhinoendoscopy is a minimally invasive therapeutic and diagnostic study that can be used to examine the nasal cavity and perform minor manipulations on intranasal structures that are difficult to access for conventional rhinoscopy.

This study is carried out using a rhinoendoscope (flexible or rigid), and an enlarged image of the area under study is displayed on the monitor screen. Modern rhinoendoscopes allow for photo and video recording of the study, which is of particular value for assessing the dynamics of treatment.

Indications for rhinoscopy are:

An endoscopic examination is performed after local anesthesia by irrigating the mucosa with local anesthetic sprays. It lasts no longer than half an hour, no preliminary preparation is required.

In addition to therapeutic, surgical rhinoendoscopy is used for diagnostic purposes - to diagnose neoplasms by biopsy.

Unlike a diagnostic endoscopic procedure, surgical rhinoscopy is performed under general anesthesia, since the operation requires complete immobilization of the patient.

Features of examination of the nasal cavity in children

Rhinoscopy in children under one year old and children of younger preschool age has its own characteristics. Children at this age categorically do not perceive such manipulations, so the procedure should be carried out as quickly and painlessly as possible. Most often, when examining the nasal cavity in young children, nasal dilators are not used, and if necessary, ear funnels are used, since they have a small diameter. When using dilators, it is advisable to pre-treat the nasal mucosa with a local anesthetic spray.

If there is no need for a nasal dilator, the doctor raises the tip of the child's nose with his finger and examines the accessible parts of the nasal cavity: the lower nasal passage, the lower concha. So that the child does not resist, the parents or the doctor's assistant seat him on his knees and fix his hands and head.

Posterior rhinoscopy in young children is recommended to be performed by palpation of the nasopharynx, however, if the child is not fixed correctly, there is a danger of traumatizing the doctor himself (bite). In difficult cases, rhinoscopy for children is performed under anesthesia, combining examination of the nasal cavity with taking biomaterial or surgical manipulations.

Complications after a properly performed procedure are rare. In some cases, for example, with sensitive or inflamed nasal mucosa, nosebleeds of varying intensity are possible due to traumatizing it with mirrors.

You should also not forget that local anesthetic solutions can cause allergic reactions, and their use in the nasal cavity or nasopharynx is very dangerous with the risk of laryngospasm, laryngeal edema and anaphylactic shock. To avoid this complication, before using a local anesthetic, the doctor must ask the patient (or the parents of a sick child) if he has any allergies or bronchial asthma.

Allergic reactions can also occur in people who have not previously had a burdened allergic history. If an allergic reaction of an immediate type occurs (Quincke's edema, laryngospasm), it is necessary to provide first aid in a timely manner. To do this, rhinoscopy using local anesthesia should be carried out within the walls of a medical institution.

If bleeding or allergies occur in the subject, the rhinoscopy procedure should be immediately stopped, and the patient should be given emergency care.

Rhinoscopy is a simple and safe diagnostic method. A properly performed procedure is painless for the patient, but at the same time very informative. However, in order for it to be painless and safe, the otorhinolaryngologist must strictly adhere to the methodology for its implementation.

What is a rhinoscopy procedure?

Flexible rhinoscopy is a quick, office-based procedure used to examine the entire nasal cavity . It is most commonly performed by otolaryngologists in the evaluation of nasal obstruction, sinusitis, epistaxis, anosmia, other symptoms of rhinitis, and head and neck cance

Nasal endoscopy or rhinoscopy is not a painful procedure ; however, it may be slightly uncomfortabl

Is rhinoscopy an endoscopy?

Nasal endoscopy, also referred to as Rhinoscopy , is typically performed in an otolaryngologist's or ear, nose, and throat office where they have a direct, high-quality and magnified vision as they evaluate your sinus and nasal passage

When should a rhinoscopy be done?

Rhinoscopy can sometimes be used to find and potentially remove foreign bodies that are lodged in the nasal cavity . Since an endotracheal tube is in place in the windpipe, the nasal cavity can be flushed to help dislodge debris.